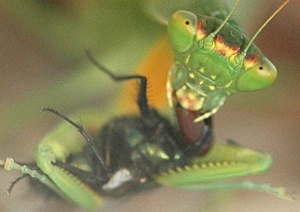 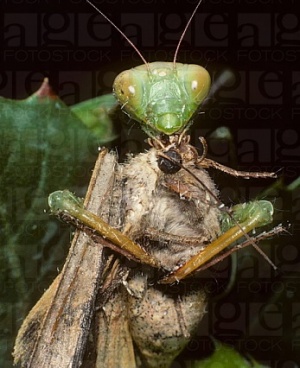 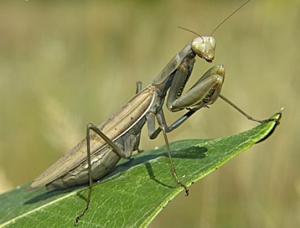 The mantises or Mantodea is an order of insects that comprises thousands of species. Adult Praying mantids may eat large moths such as Fruit-piercing mohts. Praying mantids may also catch and eat fruit flies. Praying mantids are opportunist predators and do not farm any insects or other bugs. Particularly young mantids may not yet be too large to prey on fruit flies (tephredids). The younger and/or smaller the praying mantids are, the smaller the insects (and any other living creature they may catch) they prey on. Praying mantid nymphs initially feed on aphids and fruit flies (drosophila), and as they grow, they skip to larger preys, such as tephritids, crickets and worms, and eventually moths and even much bigger preys. Weevils are also predated on by Praying mantids, which may eat anything they can catch. Adults readily mate in captivity and have one generation per season. Rearing mantids requires rearing of other insects in large quantities.

Nymphs (very tiny praying mantids without wings) emerge from eggs. The developing nymphs need lots of food available continously, and sufficient space, or they will become cannibalistic. The nymphs go through several stages (instars) before becoming adult, shedding skin between each instar. Moist conditions are required for the shedding. After the final shedding, it may take 2 weeks before the mantis is sexually matured. The female should be well fed prior to attempting to mate them. To prevent the female from eating the male, the mating ritual should also not be disturbed. Immediately after mating, the male should be removed or at least be able to escape and hide. Praying mantids may be mass-reared on Armyworms if they have been accustomed to eating them from the 2nd instar stage. Older mantids may not respond to worms unless trained to do so from the 2nd instar stage.

The female Praying mantis lays a few hundred eggs in a sticky cluster (ootheca) of several cm long, surrounded by a protective foam, attached to an object like a branch or trunk. Hatching may take weeks or months. Even among large species, newly hatched mantids may be only half a centimeter long. When fully matured, large species of mantids may have a length of up to 12 cm. Their colour is usually adapted to the environment they naturally live in. They have about 2 generations per year. Young mantids look like adults, but don't have wings. Adult females often have no wings either, or reduced wings.

Horsehair Worms (Nematomorpha, but mostly Chordodes) parasitize Praying mantids. The parasites may enter the host through an intermediate host with aquatic larvae (eg Diptera and Ephemeroptera) that is eaten by a mantis.[1]