eggs about to hatch © A.M. Varela 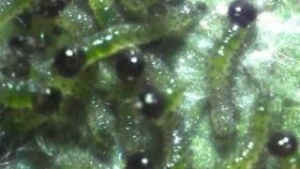 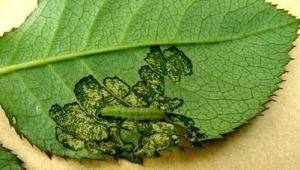 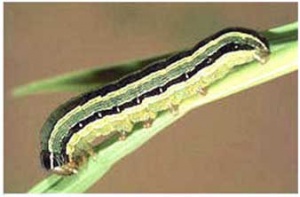 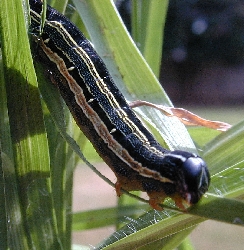 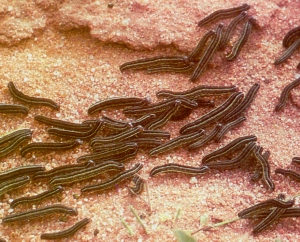 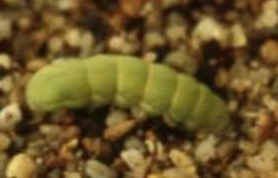 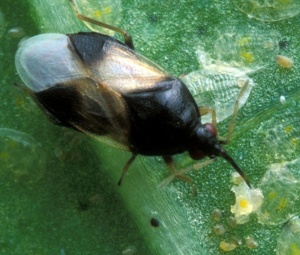 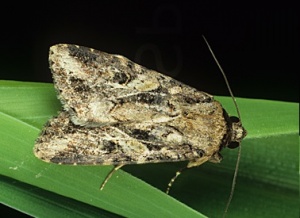 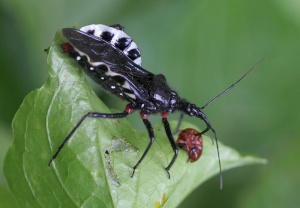 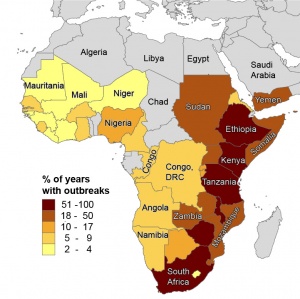 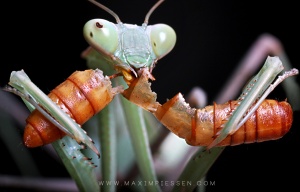 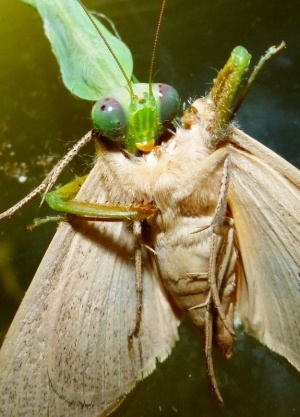 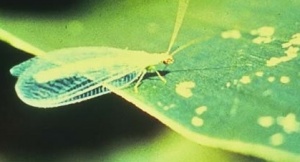 The African Armyworm (2.5 to 4 cm long) is also called Okalombo, Mysteryworm, Kommandowurm or nutgrass armyworm. It is the larval stage of a moth. It does well on wet conditions and do not proliferate in dry conditions. It has been observed in East Africa and African countries south of the Sahara, Saudi Arabia, Yemen, pacific islands, south-east Asia and Australia.[5] In Ghana it has been recorded on maize.[6] The moths are active at night, particularly between 20:00 and 22:00, feeding on nectar. The larvae are active during daytime. The moths (av. 1.6 cm long, wingspan 3 cm) live about 10 days (5 to 16 days). The female moth (only) needs water to complete oviposition.[7] (hence outbreaks coincide with rainfall after droughts) One female maximally lays about 1000 eggs in total; 500 to 600 on average. Eggs have a 0.5 cm diameter. During a period of 10 days the cream-green eggs are laid at night (before midnight, with a smaller peak at about 02·00–04·00 h.[8]) in 2 or 3 batches of 10 to 400 in one or more layers on leaves or other surfaces. The egg mass is covered with down and black hairs from the female. Right before hatching, the black head of the larvae makes the eggs turn dark. The eggs hatch in 2–5 days, usually in the early morning. The hatched larvae are greenish-translucent and just 1 mm long. As they feed on the youngest foliage of plants, they gradually become green. Larval stage lasts 14 to 22 days. Pupae are formed just (2-3 cm) below the soil surface in a soil cell, in preferrably soft, moist ground. The pupae are mahogany-brown and 1 cm to 1.5 cm long. The pupal phase takes 7 to 15 days. In East Africa the total lifecycle lasts about 25 days at an average temperature of 26°C.[9] Spodoptera exempta may have up to 13 generations per year.

At high density (> 8 / L container [10], up to 1000 / m2) the caterpillars are black with yellow stripes, and exposed to the sun, avoiding shade. At low density, they are green or brown (and larger [11]), and hide in the shade. They turn black when they are 10 days old. The larvae are not just darker, but also more resistant to baculovirus infection when reared at high density (gregarious form) compared to being reared singly (solitary form). This is due to elevated vertical transmission of infection in gregarious caterpillars. [12] The gregarious larvae have higher nitrogen conversion efficiency on an extreme protein-limiting diet, and accumulate more lipid per amount of carbohydrate consumed on carbohydrate-deficient diets.[13] Though the gregarious form grows faster, the ultimate sizes of the caterpillars and moths differed little from the solitary form.[14] Protein levels, glyceride and carbohydrate are comparable in the two forms (gregarious and solitary).[15] At emergence, however, abdominal glyceride contents of gragarious moths is 2.5 to 6.1 times greater. Well hydrated gregarious moths lay twice as many eggs as well hydrated solitary phase moths.[16]

The Spodoptera exempta larvae feed on all types of wild grasses (Poaceae) and sedges (Cyperaceae), and on early stages of grains (incl. oat, sugarcane, maize, wheat and rice). Their preferred grasses are sweet grasses in the genus Cynodon. They grow faster (and bigger) on well watered plants (80-90% moisture content) vs water stressed plants (60-70% MC). Survivorship is generally lower on water stressed plants in very young and older larvae.[19] The larvae posess receptors with sensitivity for specific sugars.[20] They prefer more carbohydrate over more protein.[21] But the opposite is true when virally or parasitically infected.[22]

High silica in grasses and sedges inhibits Armyworm growth. Seven of the ten most important food crops are silicon accumulators (up to over 10% in Wheat and 6% in ryegrass). The silica content of specific grasses can be considerably higher than in many other plants. Spodoptera exempta cannot easily adapt to physical defences such as silica. Silica in the leaves of grasses (2-5% of dry leaf mass [23]) acts as a defence. Even with short-term exposure, but also progressively impacting with time, silica reduces the conversion efficiency of food into bodymass, and the amount of nitrogen absorbed from their food, leading to reduced growth rates. Exposure to silica-rich diets also caused an extremely rapid increased mandible wear.[24] This results in mechanical protection of resources in chlorenchyma cells. As a result of this (and of the disrupting influence of phytoliths on microbial action in the gut), less chlorophyll is released after grinding and more chlorophyll is retained after passing through the gut.[25]

Grasses preferred by Armyworm larvae are sweet grasses in the genus Cynodon. [30] Bermudagrass may contain 0.15% silica [31] or 1.5% silica.[32] Net reproduction rate of Spodoptera exempta is greater on Bermuda grass (Cynodon dactylon) and maize than on Kikuyu grass, Pennisetum clandestinum, Guinea grass, Panicum maximum and Setaria plicatilis.[33][34] Larvae offered a choice of maize and Bermudagrass showed a preference for Bermudagrass. Survival was higher on Bermudagrass than on maize but the developmental time was longer.[35]

S. exempta may also be succesfully reared on thin lamellae. (5 g. / individual, 60% survival)[36] or dried maize-leaf powder renewed at weekly intervals. (> 90% survival. At 25°C eggs hatched in 3 days, larval period was 12–16 days and pupal period 10-12 days.) [37] Rearing armyworm on a simple diet with milled good quality grass as the main diet constituent will not negatively affect fecundity of adults.[38] The higher the nitrogen content of the leaves, the higher the Armyworm fecundity. In general, Armyworm fitness is hardly affected by leaf's nitrogen levels.[39]

Armyworms may be mass reared at 24 to 25°C, 70RH and a 12h light:12h dark cycle. The armyworm performs best on a 80:20 protein:carbs diet (preferrably casein:sucrose). They cannot use maltose for optimal growth.[40] Armyworm moths may be used to rear Praying mantids Armyworms may be used to feed fish (like tilapia) or to rear Orius insidiosus and Agriosphodrus dohrni, and Armyworm eggs may be used to feed green lacewings. The 2 cm long Assassin Bug (Agriosphodrus dohrni), native to China, India, Indonesia) may also be reared (fed every 3 days) on yellow mealworms, in plastic cases, under a temperature of 23°C and RH of 50%.[41] The Assassin Bug may feed on all kinds of bugs, including aphids, beetles, hoppers', worms and caterpillars.

There is an annual Insect Rearing Workshop at the United States Department of Agriculture’s laboratory at Mississippi State University, organized by the entomology department. It was initiated by Dr. Davis and other experts who have over a period of more than 50 years developed an entire technology to breed large numbers of insects. During a week of lectures, labs and conversation, he and several colleagues pass on knowledge learned during a half-century of research, improvisation and hunch. The wisdom includes how to organize a lab to keep insects free of disease and contamination, how to create untainted artificial diets and when to add wild genes to keep a colony healthy.[42]

Newly-emerged Spodoptera exempta moth feed avidly on sources such as nectar and honey. Nectar is mainly water and sugars (55% sucrose, 24% glucose, 21% fructose), plus various aromas [43] (including benzyl acetone [44], butyric acid, ethyl 3-methylbutyrate, 2-methylbutyric acid, acetic acid, benzaldehyde, homofuraneol, gamma-dodecalactone and beta-damascenone, delta-decalactone and methional[45]) and other traces (incl. repellents [46]). The aroma profiles of flowers are influenced by 1,4-dimethoxybenzene and 1,2,4-trimethoxybenzene, of which nectar is the main source.[47] The ratios of sugars and water in nectars vary greatly.[48]

Spodoptera exempta moths also need water. Sucrose (and not protein / amino acids) may increase fecundity and longevity in female moths, but strictly only water is required to achieve their reproductive potential (to commence oviposition). [49] Nectar sources are specifically important for migrating moths.[50] Similar to bees, one may feed the moths with sugar-water instead of water.

Most of the protein content of insect egg yolk is made up of lipoproteins and phosphoproteins. Vitellogenin is the precursor of such proteins that are a source of nutrients during early insect development. Vitellogenin has antioxidant and hormonal properties. Vitellogenin influences lifespan through anti-oxidant and immune functions. Reducing vitellogenin increases susceptibility to oxidative damage. [51] Egg yolk protein provides peptides with angiotensin-converting enzyme inhibitory activity (controlling hypertension), radical scavenging activity and α-glucosidase (which catalyzes the cleavage of d-glucose from oligosaccharides and disaccharides) inhibitory activity.[52]

Within the Spodoptera genus, Spodoptera exempta is highly genetically diverse. One study revealed 17 different haplotypes within a single population of armyworms [53], with a size variation of approximately 115 to 153 kb. [54] This is in support of the notion that Spodoptera exempta is specifically adapted for survival at low population densities.[55] It also explains why S. exempta (the high-density form) may readily become resistant to pathogens. Spodoptera exempta shows density–dependent phase polyphenism; it may develop different phenotypes at high and low population densities. This gives S. exempta the opportunity to invest heavily in polyphenism when this is required the most; when the likelihood of exposure to pathogens is the highest (at high-density population levels). In reared Spodoptera exempta, death is usually caused by a nuclear polyhedrosis virus.[56]

Nevertheless, prior to natural selection overcoming a pathogen threat, initial losses may be very high; In unsterile conditions of maintenance, almost all laboratory cultures from wild-caught female moths sustained heavy infections of a nuclear polyhedrosis virus. The appearance of the symptoms of polyhedrosis was accelerated at higher temperatures, and the incidence was higher in more crowded cultures. Transmission took place from contaminated leaves to larvae and probably from one larva to another. There was evidence also of generation-to-generation transmission through the egg. The effect on polyhedra of immersion in alkali solutions was investigated; It was found that immersion for 15 minutes in 0.2% caustic potash effectively dissolved the matrix and inactivated the virus. When all equipment was sterilized in this way (or, later, with 0.4% caustic potash) apparently virus-free cultures were obtained by rearing the larvae from wild-caught females in isolation and breeding from those that survived to become adults.[59]

When observing 3 generations, it appeared that most moths of the first generation migrated, after emerging from pupae in the ground, the smallest laid eggs locally. Their caterpillars were small, passive, heavily parasitized and most of the moths which developed from the survivors laid eggs locally. But vigour was regained in the third generation; this was expressed by large caterpillars of both passive and active forms, little parasites and large migrant moths.[60] 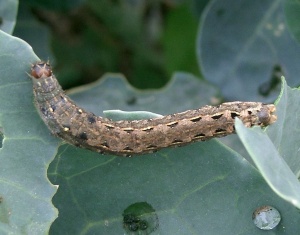 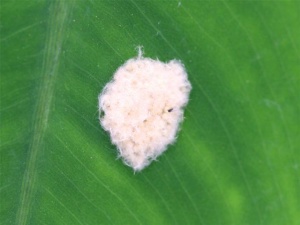 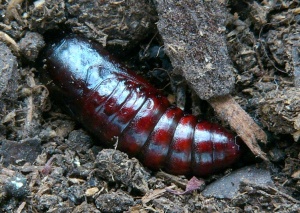 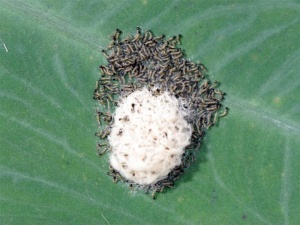 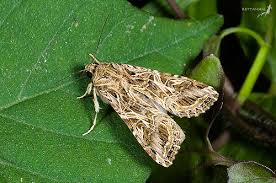 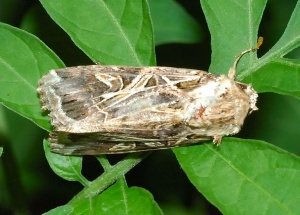 Spodoptera litura, the Tropical Armyworm, is also known as Cluster caterpillar, Cotton leafworm and Tobacco cutworm. It is native to The Philippines, Malasya, Indonesia and Australia and feeds mostly on plants from the dicotyledonous family. The moth may grow 2 cm long. The green lacewing Mallada boninensis may be reared on neonates of Spodoptera litura. Compared to a diet of neonates of Helicoverpa armigera (African bollworm) and Earias vitella (Spotted bollworm), Mallada boninensis longevity and reproductive potential was better on neonates of Spodoptera litura.[61]

Spodoptera moths feed on nectar, which is mainly sugar and water, virtually deficit in protein. Female moths must therefore rely on their larval diet to provision sufficient protein pool for vitellogenesis. Females caterpillars are more efficient at converting protein intake to body protein growth than males, reflecting their high protein investment for egg production. Males are more efficient at depositing lipids from carbohydrate intake, which may be related to their greater propensity to migrate.[62]

Relative to pale individuals (low density), dark larvae (the high-density phenotype) exhibited higher haemolymph and cuticular phenoloxidase (PO) activity and a stronger melanotic encapsulation response to an artificial parasite inserted into the haemocoel.[63] PO is a key enzyme in the synthesis of the melanin pigment and implicated in resistance to a range of pathogens in the haemolymph, midgut and cuticle.[64][65]. The density of haemocytes in the haemolymph is indicative of the ability to encapsulate metazoan parasites.